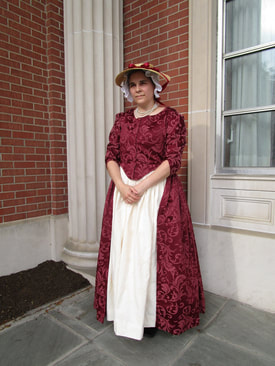 Abigail was the wife of John Adams (leader in the American Revolution and the second president of the United States) and one of the most accomplished women of the revolutionary era. In her many surviving letters, she was outspoken in her opinions on the issues of her day and correspondence with her husband reveals a marriage of mutual love and respect. Her life intertwines with key events of the War for Independence and her sacrifices supported the founding of our nation. 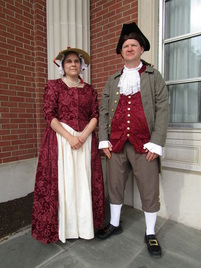 John Adams occasionally comes along when he is not attending congress.
In this presentation Mrs. Adams will share with you her experiences from the beginning of the conflict with Britain to the end of the War for Independence. Three popular songs of the time are sung during the program. The program is 30-35 minutes long and presented in character and in costume followed by a question and answer time in Chautauqua style. This means that questions can be asked to Mrs. Adams as though she is still living and then further questions may be asked after she comes out of character. Program fees vary upon travel distance. For more information or to schedule a performance contact Raylene Hlavaty here.

In December 1783, Abigail Adams was separated from her dearest friend by a vast ocean. Their marriage in October 1764 had coincided with the beginnings of trouble between the American colonies and Great Britain. With the end of the French and Indian War, Parliament was looking for a way to pay the bill for removing the French threat in America. It seemed proper that the American colonies ought to contribute their share. Early in 1764, Parliament passed the Sugar Act which began a string of unacceptable taxation which included the Stamp Act in 1765, the Townshend Acts in 1767 and the Tea Act in 1773. After the “destruction of the tea” in Boston harbor in December 1773, Parliament passed the Coercive Acts which closed Boston's harbor and put Massachusetts under military control. John had been outspoken in his objections to Parliament's taxation and joined the delegates attending the First Continental Congress. Abigail remained at home to care for their farm, home and four children—Nabby, Johnny, Charles and Tommy.
The First Continental Congress held in September 1774 hoped to find a peaceful way to restore their relationship with Great Britain after the Coercive Acts. Many believed that since each colony's charter was granted directly by the king that Parliament had no jurisdiction over them. They sent a petition to the king acknowledging his authority and pleading that the Coercive Acts be repealed. A declaration of rights was drawn up and a boycott of English goods agreed upon.
The king and Parliament took little notice of the petition and John made plans to attend the Second Continental Congress. A few days before his departure, news of the Battles of Lexington and Concord reached him. John left for Philadelphia with Boston controlled by the British and surrounded by militiamen. Abigail was busy providing food and lodging for a continual stream of militiamen and refugees. On June 17, 1775, Abigail could hear the sound of cannon from the direction of Boston. Nearby Penn's Hill offered a view the battle taking place on Bunker's Hill.
In Philadelphia, John nominated George Washington to be the commander of the Continental Army and General Washington hastened to Boston to take command. When he arrived, Abigail made a visit to the army camp in Cambridge to welcome him. In his first decisive act General Washington placed the cannon retrieved from Fort Ticonderoga atop Dorchester Heights. From that hill the continental army had command of the city and the harbor and the British were forced to evacuate Boston.
John was an early advocate for independence, but the other colonies were more cautious. After George III rejected their petitions and hired German mercenaries, congress realized they would need help from France who was unlikely to help unless the colonies made a permanent split. John made a passionate plea for independence which was finally declared on July 2 and the Declaration of Independence adopted on July 4, 1776. When a copy of the Declaration reached Boston, Abigail was there with the children being inoculated against Small Pox which had invaded after the British evacuated. The Declaration of Independence was read from the balcony of the state house and sparked a celebration.
During the war, John served on the Board of War appointing officers, and recruiting, paying and provisioning soldiers. He was sent to France to help negotiate French aide. Upon the American victory at Yorktown, VA, he was one of the American ministers sent to negotiate peace with Great Britain. During John's long absences in Europe, Abigail had limited communication with him. She did, however, make good use of his presence in Europe by having him send salable articles that were scarce in wartime Massachusetts.
When the war was over, John was still in France and would be appointed the first ambassador to Great Britain. Abigail joined him in France and remained with him throughout his remaining European service. Returning to the United States, John and Abigail found a new government under the newly adopted Constitution and John became its first Vice President. He became the second president in 1796.
Abigail died October 28, 1818. John lived until July 4, 1826. He died the same day as Thomas Jefferson—the 50th anniversary of the Declaration of Independence.