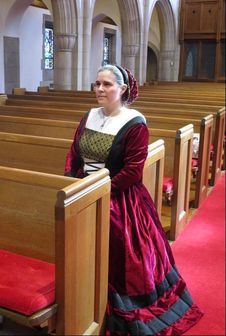 Katharina von Bora Luther
All she'd ever known were the walls of the cloister until the
forbidden words of Martin Luther were smuggled in. She
would never be the same. Freedom in the Gospel impelled
her desperate escape from the convent. She was rejected
in love, but found compassion in Luther. Their marriage
caused a scandal, but Katharina found love and purpose
as she endeavored to put her new faith into action. 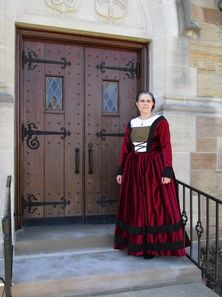 This is a 30 minute presentation followed by a question and answer time. It is conducted in first person and in costume. Several hymns by Martin Luther are sung including: “Dear Christians One and All Rejoice,” “We All Believe in One True God,” “Christ Jesus Lay in Death's Strong Bands," "All Glory Be to God Alone," and “A Mighty Fortress is Our God.” Program fees vary upon travel distance. For more information or to schedule a performance contact Raylene Hlavaty here.


Katharina von Bora was just six years old when her mother died. When her father remarried, she was taken to the Benedictine convent at Brehna in Saxony. She would learn to read and write and pray. Four years later she would be moved to a Cistercian convent at Nimbschen. Perhaps her father was not doing well since the Cistercian convent was less expensive to provide for Katharina's care (and much cheaper than a dowry). She would enter as a novitiate and be consecrated as a nun six years later at age sixteen. There she expected to live the rest of her life.
Bits and pieces of Luther's writings began slipping into the convent. Perhaps they were silently passed from one to the other as they performed the offices of the church or prayed for those in purgatory. Katharina began to question the value of being a nun. Luther said the life of a nun would not save, that salvation was by faith and that no vow was valid if it was not freely made from the heart.
The escape was planned for Easter eve. When the time came, the escaping nuns met Leonard Koppe just outside the convent. They piled into Koppe's wagon and were covered. All night they traveled. As Easter morning dawned, they arrived at Torgau in freedom. The next day they completed their journey to Wittenberg and met their sponsor. Luther now had to figure out what to do with nine runaway nuns.
Katharina became acquainted with a young man and it looked as though a proposal would be forthcoming, but his parents were not impressed with a runaway nun without a dowry. The Cranach family welcomed Katharina into there home until other arrangements could be made. Lucas Cranach was a friend of Luther and court painter for Frederick the Wise and he painted several pictures of the the Luther family over the years. But now Katharina was still waiting for a husband. Luther presented another suitor. This man was miserly and irritable, but how could Katharina refuse? She entreated Nikolaus von Amsdorf to intercede with Luther and countered that she would not refuse either Amsdorf or Luther.
Luther began to consider what could be done for Katharina. He was not in love with her, but he cared deeply for her plight. Daily he expected a heretic's death, he had no money and he was fifteen years her senior. After a visit to his parents, he found that not only would his marriage please his father (hoping for grandchildren), but he could “rile the pope, cause the angels to laugh and the devils to weep.” A visit to Katharina confirmed that she was willing to face the challenges life with Luther would entail. They married in a private ceremony at the Black Cloister (the former monastery where Luther still lived) on June 13, 1525 and followed in up with a church wedding and banquet on June 27.
Katharina had her work cut out for her. She spent her first night on a bed of straw that had not be changed for a year. Working nonstop she began to put the Black Cloister in order. She whitewashed the walls, cleaned the rooms and planted the garden. She kept cows, pigs, poultry and goats; made beer and cheese; caught fish; and grew apples, pears, peaches and cherries. Luther soon found that he had a capable manager in his wife and gladly trusted in her. Luther received a salary from the college and from Elector Johann the Steadfast, but he would not take money for his lectures or his books. “Give and it shall be given you” was Luther's motto, but his expenses overtook his income. Katharina was able to balance the books while joyfully sharing the fruit of her labor. Her table was always open. Every night a select group of friends and students would share news and discuss issues and Katharina participated as well.
Children were a great blessing to the Luthers. They had six children who were an endless source of joy and inspiration. Luther wrote at least one hymn for them and a catechism. Katharina became an indispensable support for Luther. There were times when he would lock himself in his study to work or fall into deep depression. Katharina cheered him and cared for him. As Luther grew older, he experienced many illnesses. Katharina skillfully nursed him through headaches, rheumatism and kidney stones. But Luther could not last forever and when he died on February 18, 1546, Katharina would face war and plague on her own. On a trip to Torgau (a city to the south of Wittenberg) to escape the plague, she fell from her wagon and was injured so badly that after three months confined to bed, she died on December 20, 1552 with these words, “I will stick to Christ as a burr to cloth.”