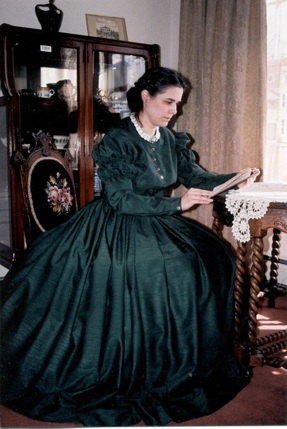 
A northern woman married to a Southern man,
Margaret J. Preston shared the sufferings and
passions of the South. Her book Beechenbrook:
A Rhyme of the War was beloved throughout the
South as a tribute to the families devoted to the
"lost cause." Throughout a life filled with loss and
disrupted by war, her faith in God and devotion to
family gave her strength to persevere.
Daily Record Article

This is a 45 minute program followed by a question and answer time. Margaret is portrayed in first person and in costume. Program fees vary upon travel distance. For more information or to schedule a performance contact Raylene Hlavaty here. 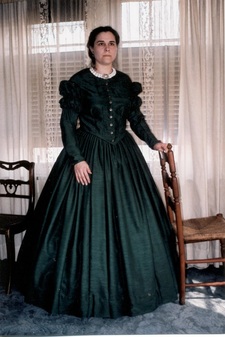 It is August 27, 1870 in Lexington, Virginia and Margaret Junkin Preston has just received her newly published book Old Song and New. It is a collection of poems that began many years before in Pennsylvania during her childhood and grew throughout education, illnesses, a move to Virgina, marriage and civil war.
In Virginia, Margaret's sister met and married an odd young teacher from VMI, Thomas Jackson, and died bearing their first child. Jackson continued to live with the Junkin family and Margaret became well acquainted with the man who would become known to history as “Stonewall” Jackson. Well past the age expected for marriage, Margaret eventually married a widower with seven children, John Preston, founder of the Virginia Military Institute (VMI).
Finally, with a home of her own, the whole country began to unravel. With the election of Mr. Lincoln as president, the secession of several states and a call for troops by the recently installed president, the secession of Virginia was unavoidable. Mr. Preston was soon serving Virginia in various capacities and communicating with his wife by letter. Margaret had given up writing after her marriage because she felt that her husband didn't approve, but he soon realized her abilities and began to encourage her writing.
In June 1864, she experienced the war first hand when the Union Army invaded Lexington. Her smokehouse and cellar were emptied and she watched as VMI went up in flames. Through her own many losses of war, her writing allowed her to express the heart of aching Southerners. Then one dark winter day in early 1865, she received a letter from her husband. He had sent her a small poetical book and said he thought she could “write something better in the same line.” She set to work and soon sent a manuscript back to him in Richmond. He was full of praise for Beechenbrook: a Rhyme of the War and had 2000 copies printed, but most were lost when Richmond fell.
When the struggle finally came to a end and the rebuilding began, Margaret continued her writing. She had Beechenbrook reprinted, contributed to several magazines and wrote reviews of the current literature all while caring for a busy household. She always felt that her abilities were a gift from God that must be expressed and ought to be shared with others.