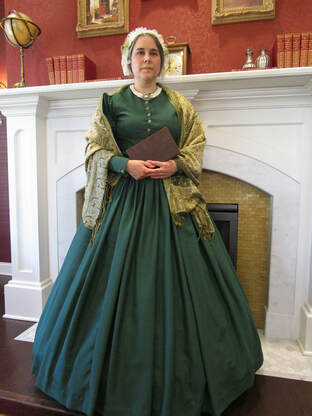 Rose O'Neale Greenhow, Confederate spy, was a Washington socialite and confidant of presidents, senators and congressmen in the years leading up to the war. Her strong opinions, sharp eye and late night meetings caught the attention of Allan Pinkerton and ended in house arrest followed by the Old Capitol Prison. After her release she ran the blockade to seek support for the Confederacy in Europe.

Rose was a student of the Constitution and would like for your group to have their own copies in the form of a small booklet. Rose also used a cipher to send secret messages. Your group can see a sample of a cipher and do a little decoding as they wait for the program to begin. This is a 35 minute presentation followed by a question and answer time. It is conducted in first person and in costume. Program fees vary upon travel distance. For more information or to schedule a performance contact Raylene Hlavaty here.

Born into a well established family in Maryland, Rose O'Neal might have had an easy life, but a terrible accident left her mother a struggling widow with five young daughters. In their teens Rose and her sister Ellen moved from the Maryland countryside to live with their Aunt Maria. She and her husband ran Hill's Boardinghouse in Washington, D.C. The boardinghouse was popular with congressmen and Supreme Court justices and Rose became acquainted with the residents and observed politics in action. Through the marriages of her two older sisters Rose was introduced into Washington society. Rose was soon acquainted with Dr. Robert Greenhow who had come to town to take a position in the State Department. Rose's charm and ambition was the perfect balance to Robert's quiet, scholarly nature and they were married May 26, 1835. By 1850 Rose had born seven children and lost four of them. Robert had weathered department backbiting and six presidential transitions.

The Greenhows were ready for a change. They traveled to Mexico City and then to California to help settle the land claims being made after the Mexican War. Rose remained a year in San Francisco and then returned to their children in Washington and gave birth to their eighth child—“Little” Rose. Robert remained in San Francisco, but was injured in a fall and Rose received the news that she was now a widow. Rose relied on her many friends and continued to follow the ever polarizing politics in the capitol. She corresponded with James Buchanan and encouraged him to run for president. Having a close personal friend in the White House put Rose in the center of the social scene and she courted friends of all political persuasions. Everything changed when President Lincoln took office. Rose no longer had the same influence and then her daughter Gertrude became her fifth child to die. Rose needed a purpose. Just weeks after the attack on Fort Sumter, Rose was asked to gather information for the Confederacy and given a cipher. Since she still had many important friends, she simply continued to socialize and be charming to the right people. When the right information came her way, she sent Betty Duvall across the Potomac with a message to Beauregard. Boldly, Betty made her way to the nearest Confederate camp and approached General Bonham. Once she was assured that her message would be taken to Beauregard, she took out her tucking comb, letting her long hair fall and pulled out a small package. The ciphered message warned that a Federal advance was planned for the middle of July. She sent two more messages with critical information before the Battle of Manassas (Bull Run) was fought on July 21, 1861.
Following the Federal defeat at Manassas, more attention was paid to Rose. She began to notice that she was being followed. One afternoon upon returning home, she was met by Allan Pinkerton and abruptly arrested. She was taken inside and made a prisoner in her own home along with eight year old Little Rose. Outraged by the intrusion, Rose watched as her house was searched. Her captures showed no respect for the possessions of her deceased husband and daughter. Even the scribbles of Little Rose were inspected. For five months Rose was under house arrest. Although she could not leave her home, the soldiers who guarded her provided useful information that she found ways of passing on. When Pinkerton found that Rose was still sending messages, he had Rose and her daughter moved to the Old Capitol Prison. Remarkably, this was the same building where Rose had lived as a teen and where she sat with Calhoun on his deathbed. Rose found the old boardinghouse much changed. Her room was dirty and crawling with vermin. She had nothing to do and she and Little Rose had very little to eat. After four and a half months, Rose was released on the condition that she go south and not return until the end of hostilities. Rose spent a year in Richmond and then sailed to Europe at the request of President Davis to garner support for the Confederacy. Unfortunately, she was not able to secure the assistance of Britain or France and she decided to return home. When running the blockade at Wilmington, NC on October 1, 1864, her ship ran aground. Fearful of capture, Rose insisted on taking the landing boat to shore. The high waves overturned her boat and she was pulled down and drowned by the weight of the money she was carrying.