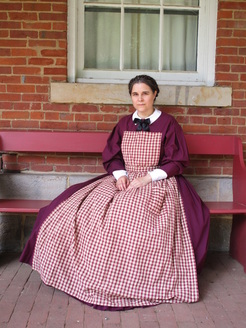 Jennie Wade
The only civilian killed during the Battle of Gettysburg,
Jennie Wade sacrificed her life for the union without
ever putting on a uniform. She steadfastly kept to her
baking to provide bread for hungry soldiers in the
midst of bullets and cannon shells when she found
herself on the dividing line between union and
confederate forces in July 1863. As she was mixing
more dough for biscuits, a stray bullet came through
the outer door and pierced her heart. 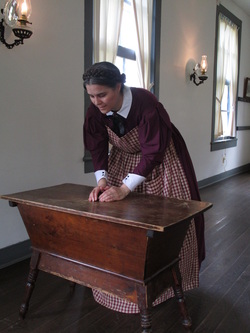 This is a 30 minute program followed by a question and answer time. Jennie Wade is presented in first person and in costume. Program fees vary upon travel distance. For more information or to schedule a performance contact Raylene Hlavaty here.

Jennie Wade was 20 years old and living in Gettysburg, Pennsylvania in 1863. She heard the reports of battles and the rumors that the rebels were on their way north, but Jennie had no way of knowing that her sweetheart Jack Skelly had been wounded in a battle fought as General Robert E. Lee marched the Confederate Army north in June 1863. Jack and Jennie hoped to be married in the Fall if Jack could get a furlough. With all the rumors of invasion, Jennie's 17 year old brother John finally convinced their mother to let him enlist and Jennie was too busy altering his uniform to think of much else.
On June 26, Jennie finished the uniform and headed out to be with her sister Georgia who was having her first baby. Jennie's mother was already with Georgia at her sturdy brick home on Baltimore Pike on the south side of town. Nearing the corner of Breckenridge Street and Baltimore Pike, Jennie looked up to see Samuel, her twelve year old brother, being escorted by Confederate soldiers. While she had been sewing, General Early had marched into town to requisition horses and supplies. Samuel had been working for the butcher Mr. Pierce and Samuel was caught trying to keep the family's horse from capture. All of Jennie's pleas for Sam's release did nothing and Samuel was lead to the diamond (the square). Jennie rushed to Georgia's house and explained the situation to her mother. Thankfully her mother was able to convince the Confederates to release Sam. In the mean time, Jennie was able to welcome her new little nephew Louis Kenneth McClellan.
General Early left town the next morning headed east to York, but Confederates were still spread across the state. On Wednesday morning July 1, Jennie could hear the sound of cannon coming from the northwest of town. Her mother was still staying with Georgia on the south side of town and Jennie reasoned that with its thick brick walls it would be a safer place. She gathered a few items, locked the door and headed to Georgia's house with her eight year old brother Harry.
Things went well for most of the day, but by afternoon Union soldiers were retreating into town. The day was hot and Jennie began retrieving water from the well behind the house and giving drinks to the soldiers on the street. Jennie was kept busy bringing them water until the front of her dress was drenched. Jennie's mother also shared their bread and began baking more. By 5:00 PM the lines of battle had shifted and Jennie found herself on the front lines. She had to retreat inside the house where she and her mother continued to bake bread and biscuits for the soldiers. That night she lay on a lounge under a window listening to the groans of wounded men who had fallen around the house. She could hear them calling for water. Quietly she got up and carried a pitcher of water out to the wounded men.
The following morning was quiet, but by afternoon the bullets were thudding against the brick walls of the house. Soldiers had found their way into several building and were shooting at anything that moved on the street. Then a terrible crash was heard above their heads. A shell tore through the roof, through the dividing wall that separated the house into a two family dwelling (the McClean family lived in the other side) and landed with a thud in the overhang of the roof on the south side.
On the third day of the battle, the whole house was awaken very early by the booming of cannon coming from the direction of Culp's Hill. At 7:00 AM a bullet came through the north parlor window and splintered the bedpost on the bed where Georgia and her baby lay. Jennie was afraid for her sister and commented that “if there is anyone in this house that is to killed today, I hope it is me as Georgia has that little baby.”
By 8:30 AM Jennie's hands were covered in sticky biscuit dough and flour. A bullet penetrated the outer north facing door, passed through the kitchen door that was left open and into Jennie's heart. She was killed instantly. Her mother saw it happen and Georgia screamed when she was told. Her scream brought soldiers down from upstairs and others from outside. The soldiers determined that the family should seek shelter in the cellar. This was easier said than done since the only door out faced north where most of the shooting was coming from. Going upstairs, the soldiers opened up the hole made from the shell on the previous day and lead the family through the attic and down through the McClean side of the house out the south door and into the cellar. Jennie's mother insisted that Jennie be brought too. She was wrapped in a quilt and carried down with the others. They all stayed there until the next day except Jennie's mother who went back to bake the 15 prepared loaves of bread.
Jennie died never knowing that Jack Skelly had been mortally wounded at Winchester, VA at the Battle of Carters Woods two weeks before Gettysburg. Jack died from his wounds two weeks after Gettysburg never knowing that his Jennie was already gone.